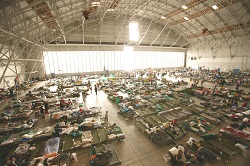 A controversial topic dominating news media in recent months has been the immense wave of Syrian refugees entering European and Middle Eastern nations for safety from the conflict gripping their country. With little infrastructure to accommodate such a surge of people, many European Union nations are beingcriticized for their treatment of refugees. Many have been forced to set up makeshift refugee camps to feed, house, and register the incoming Syrian nationals. However, these makeshift camps often lack the materials and staffing structure necessary to process such numbers. More, the conditions in these shelters are rarely ideal, and can be hotbeds for a number of infectious diseases and environmental health threats.

With more refugees on their way, European nations have scrambled to put together plans to support more people but political tensions have made progress on the issue painfully slow. European Union officials have called upon their western allies to lessen the load of Europe by taking in thousands of refugees in need over the next few years. With such public failures in shelter operations taking place in Europe, many are wondering: can the United States do any better?

Parallels exist stateside in the sudden, wide-spread need to set up shelters following major natural disasters. Every year the United States faces tornadoes, hurricanes, wildfires, blizzards, and a plethora of other natural occurrences that have the capacity to cause widespread destruction and drive whole communities to seek shelter in their jurisdiction or elsewhere. Two such disasters, Hurricanes Katrina and Sandy, exemplify the shortcomings that exist in the traditional system for emergency long-term sheltering, as well as the unhealthy environmental conditions that can often have just as detrimental an impact on community health as the disaster itself.

A decade after it made landfall, Hurricane Katrina’s impacts still linger in the United States. Delayed federal response and limited resources available to the local government, caused the situation in New Orleans to quickly deteriorate into a state of chaos. Overwhelmed by the numbers of people in need, city shelter locations lacked the supplies to adequately maintain the public’s health and safety. Once the waters receded and transportation out of the city became possible, hundreds of thousands of people left to seek refuge elsewhere in the county, taxing the resources of those new communities up to 750 miles away. Similarly in 2012, when the storm surge from Hurricane Sandy struck the mid-Atlantic coastline, people in seaside communities from Long Island to southern New Jersey expressed dismay over the success of sheltering operations. Though many coastal towns and cities were advised to evacuate beforehand, a significant number of residents stayed mostly for fear of looters. Rescue efforts bought hundreds to local hotels instead of established shelters; months later locals still living in hotels voiced concern over inconsistent governmental messaging and recovery supplies. Had there been more well-established sheltering and response plans in place, it is likely that recovery would not remain a struggle today.

Environmental health conditions and threats are also a major concern when it comes to shelter operations. Environmental health professionals perform many critical functions in shelters: conducting shelter assessments, testing drinking water supplies, conducting food safety inspections, and evaluating general safety and sanitation. Because a large number of people are living in such close quarters, often in facilities not meant to house evacuees for an extended period of time, it is easy for shelter residents to swap germs, leading to increased rates of disease and illness. A norovirus outbreak in a Houston Hurricane Katrina shelter, where 18% of the population suffered symptoms of acute gastroenteritis including diarrhea and vomiting, exemplifies the ease with which infections can travel in sheltering situations. Indeed, European countries taking in Syrian refugees are currently dealing with concerns over vector-borne disease outbreaks in shelters, particularly the spread of louse-borne diseases as a result of crowded living conditions. Maintaining proper food safety in emergency shelters is another important aspect of ensuring environmental health. All food should be stored at and cooked to the proper temperatures; potable water should be used for drinking, cooking, and ice; and shelter operators should design a food-safe menu that limits the use of potentially hazardous foods like meat, eggs, cut fruits and vegetables, and dairy products. And while it might be tempting to cut corners in emergency situations, safe food handling practices should always be followed, including proper handwashing and equipment sanitation, the use of gloves, and insect control measures.

Local health departments responsible for setting up and maintaining emergency shelters should use the Centers for Disease Control and Prevention’s Environmental Health Shelter Assessment Tool. This is a resource to assist environmental health practitioners in conducting a rapid assessment of shelter conditions during emergencies and disasters. The tools is an assessment form that covers 14 general areas of environmental health, ranging from basic food safety and water quality to pet wellness, and allows for the documentation of immediate need in shelters. The tool can be easily modified to meet local needs.

The chances of experiencing an event that displaces thousands of people are higher than ever in this country due to our increasingly unstable climate and our reliance on a federal response system. The current refugee crisis in Eastern Europe, as well as lessons learned from Hurricanes Katrina and Sandy, show the importance of shelter planning and monitoring at the local level. It is not enough to simply have a shelter place designated; jurisdictions need to be prepared for any number of scenarios with connections to neighboring communities and the resources those jurisdictions have available. Forming partnerships with key portions of community infrastructure such as local hospitals and businesses can significantly benefit sheltering practices. This is especially important when dealing with a large displaced population or delay in federal response resources. Additionally, exercising and developing contingency plans for emergency situations on a yearly basis will help train LHD staff to best mitigate negative health outcomes. Finally, it is critical to engage the local community and neighboring communities to build relationships that allow jurisdictions to function without an immediate federal response and accept an influx of people who have just been forced to leave their lives behind.

What guidance does your jurisdiction use for regulating shelter capacity and the internal environment? Would your jurisdiction be ready to receive part of a displaced population in the event of an emergency? Let us know in the comment section below.