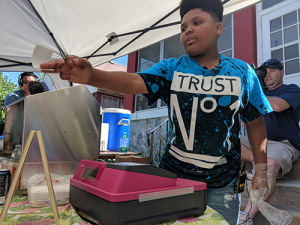 Jaequan Faulkner, 13, started selling hot dogs in front of his Minneapolis home in 2016, calling his establishment “Mr. Faulkner’s Old Fashioned Hot Dogs.” His food stand came back this summer bigger and better than before, and it grew popular with customers in the neighborhood.

Recently, his business came to the attention of local officials when someone complained that he did not have official permits.

To make sure people are safe from food-borne illnesses, all events that serve food to the public in Minneapolis must be permitted, and violators are subject to an immediate shutdown.

Instead of making Jaequan close shop, the Minneapolis Health Department worked with him to get his food stand officially permitted as an event food stand. The health department provided food safety training, handwashing equipment, a thermometer, and chemical test strips so Jaequan could operate legally and safely. Health officials advised him on which foods could safely be kept at the correct temperature during his hours of operation. The staff even chipped in to help pay for Jaequan’s initial permit so that he could operate for 10 days in front of his home per Minneapolis policy.

Health department staff also put him in touch with the North Side Economic Opportunity Center (NEON), a local non-profit that helps startup businesses.

Jaequan was nervous about his initial encounters with the health inspectors, and he thought the city might not be supportive of his efforts. However, shortly after he began talking with the health department staff, he realized they were there to help him serve food safely and be successful while doing so. This changed his perception of the city.

When a police officer approached him, he was again on guard until he heard that the police 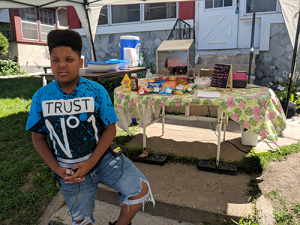 department wanted to sponsor his food stand at the nearby precinct for several days. Again, his perception of the city’s role expanded.

Jaequan has now been invited to multiple civic events to be a food vendor, and he plans to take his food stand on the road to serve customers all over Minneapolis. Stops include the Minneapolis Police and Fire Departments, the Urban League, and Sanctuary Covenant Church. As for the profits, Jaequan hopes to make enough this year to buy school clothes and a food cart for the summer of 2019.

The story of Jaequan’s hot dog stand and the role that the Minneapolis Health Department played in helping him sell food safely has been picked up by local, national and international print, radio, television and social media. For Jaequan, this has been an exciting opportunity to tell a positive story about his community.

This is also the story of true public servants looking out for the common good, assuring that food is prepared and served safely, that a business can thrive, and that the youth in this community are supported. The approach the Minneapolis Health Department took is possible because the department infuses the values of equity, leadership, community investment, and harm prevention into all its work.