The State of Mosquito Control in the U.S.

Mosquito-borne diseases are an ongoing public health concern in the United States, but there seems to be a cyclical pattern when it comes to prioritizing mosquito control capabilities. First, a newly-emerging or re-emerging mosquito-borne disease outbreak triggers a pandemic or epidemic response in which municipalities, states, and countries request resources to support and improve local mosquito control. As a result, local capacity increases as staff are hired, training expands, diagnostic tests are developed, vaccine therapies are pursued, partnerships are established, and the threat is faced head-on. But then the seasons change, mosquito populations decrease, the sense of urgency fades, and the perceived threat lessens. Consequently, funding and resources dwindle or are withdrawn; local vector control programs are left understaffed, undertrained, and underfunded; and the public is left vulnerable to the next impending mosquito-borne disease threat. This pattern has been seen in the past with West Nile Virus (WNV) and is threatening to repeat itself following the Zika virus (ZIKV) outbreak of 2015-2017.

WNV was introduced to the United States in 1999. At that time, no federal funding existed to support local mosquito surveillance and control, and there was no nationally coordinated response to the threat. Following WNV, which is now an endemic health problem currently circulating in all 48 contiguous United States, funding for mosquito control increased and guidelines were developed to ensure a concerted effort against WNV and other mosquito-borne diseases. However, since 2004, funding for mosquito control efforts has dropped more than 60 percent, causing ripple effects in staffing, surveillance, and control activities. As a result, many local mosquito control programs may have been ill-equipped to respond to ZIKV. Controlling the spread of mosquito- and tick-borne diseases (vector-borne disease) like WNV and ZIKV is the responsibility of a variety of departments across the country, including local health departments (LHDs), yet little data exists on these departments’ level of preparedness.

Establishing a Baseline of Local Vector Control
To bridge this research gap, the National Association of County and City Health Officials (NACCHO), in partnership with the Centers for Disease Control and Prevention (CDC), developed and distributed an electronic survey to assess mosquito surveillance and control capacity among the nearly 2,000 local vector control programs nationwide. The responses were scored, quantitatively, by 10 evidence-based activities essential to a competent vector control program:

Using the CDC framework for vector control competency, the five core competencies were weighed to rank each organization as fully capable, competent, or needs improvement. 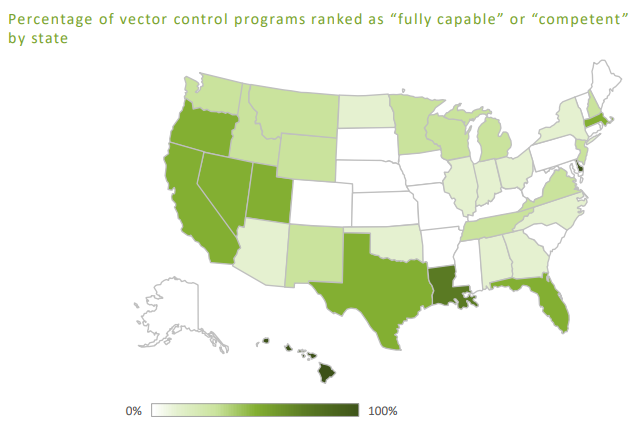 A total of 1,083 vector control organizations completed the assessment for a response rate of 53%. These responses came from LHDs (53%), mosquito control districts (20%), and the remaining 27% from other city/local governmental agencies (e.g., public works, streets and sanitation, Tribal networks, environmental health, parish police juries, parks and recreation, weed and pest, and utilities). The respondents ranked 8% fully capable, 4% competent, and 84% needs improvement. Of the vector control programs ranked as needs improvement, all of them lack the capability or capacity to perform pesticide resistance testing and more than half (52%) lack competency in performing routine surveillance and species identification.

The full baseline assessment gathers previously unavailable data on local mosquito surveillance and control in the United States. A majority of local departments reported significant gaps in programmatic activities, indicating significant susceptibility to mosquito-borne diseases like WNV and ZIKV. By identifying these gaps, this assessment enables local, state, and federal agencies and their partners to prioritize and develop targeted approaches, and regulatory and legislative solutions, for improving vector control programs.

Further, NACCHO’s mosquito control policy statement supports federal, state, and local funding for LHDs and mosquito control agencies to provide technical assistance, education, and research to support integrated mosquito management programs designed to benefit or cause minimal harm to people, domestic animals, wildlife, and the environment. NACCHO supports local efforts to improve mosquito surveillance and control capacity by releasing the results of this assessment – an expansion of the previous priority area assessment; convening a Vector Control workgroup to guide and develop technical assistance for locals; creating a Vector Control Toolkit to be released in November 2017 within NACCHO’s Toolbox; and hosting a Vector Control Summit in early 2018 to provide hands-on training, sharing sessions, and presentations from national and local subject matter experts.