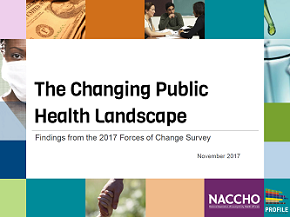 The National Association of County and City Health Officials (NACCHO) has released its 2017 Forces of Change report, The Changing Public Health Landscape, containing new findings on the forces that are affecting the nation’s local health departments (LHDs). LHDs face both challenges and opportunities as the public health environment evolves, and the Forces of Change survey helps to identify infrastructure gaps, as well as strategies for strengthening public health capacity.

Since 2008, NACCHO has periodically surveyed LHDs to assess the impact of the economic recession. NACCHO has recently expanded the survey to address more generally the forces that affect change in LHDs, including the emergence of new infectious diseases and a growing need for collaboration across sectors. Topics for analysis in the 2017 Forces of Change focus on Budget Cuts & Job Losses, Zika Prevention and Response, Multi-Sectoral Partnerships, and Workforce Recruitment.

Although the proportion of LHDs reporting budget cuts and job losses has decreased in recent years, LHDs have eliminated 55,590 jobs over the past nine years. In 2016, LHDs reported an estimated 800 jobs lost; of those, 600 were due to layoffs and another 200 were due to attrition. However, this estimate is much lower than any of the reported evidence in previous years, indicating that LHD staffing levels are rebounding.

The Zika virus was most likely to be present in the Southern and Eastern U.S., either through a Zika-carrying mosquito specie or a confirmed travel-related case. Most LHDs prepare and respond to the Zika virus by providing services related to public health surveillance, community education, and vector control in their jurisdictions; however, large LHDs are more likely to provide all services, compared to small and medium LHDs.

As LHDs face increasingly complex health challenges, developing multi-sectoral partnerships — with a broad range of public, private, and volunteer organizations — is becoming an important strategy for improving community health. LHDs appear to be highly involved in multi-sectoral collaborations to address tobacco use and opioid abuse; however, funding and competing priorities are a major roadblock to these partnerships.