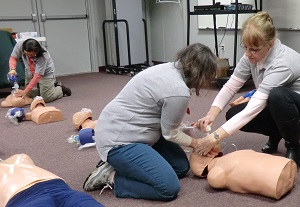 Like many organizations, the volunteers of the Medical Reserve Corps (MRC) are taking action in their communities during National Preparedness Month. The MRC is a national group of local volunteers whose mission is to improve the health, safety, and resiliency of their communities. A huge part of that mission, is to make the counties and cities they serve more prepared for any emergency or disaster. They are often engrained in their local health department, working alongside their employees to build a more robust workforce for any event.

The idea for a national volunteer corps emerged out of the tragic events of the September 11, 2001 terrorist attacks. While thousands of medical and public health professional volunteers wanted to assist recovery efforts, local responders were overwhelmed and didn’t have a way to identify or manage them. As a result, the MRC was created to serve in the event of another man-made or national disaster, but also to strengthen public health.

The MRC promotes preparedness every day, but during National Preparedness Month, they go above and beyond to hold training exercises, form invaluable community partnerships, and communicate to their neighbors the necessity of family preparedness. MRC unit leaders from across the country shared their Preparedness Month activities using the MRC Connect app.

NACCHO is hosting a National Preparedness Month Pledge to encourage local health departments and volunteer groups to commit to increasing community preparedness during September. Several MRC units have already taken the NACCHO pledge and many others are working with their local health departments to increase their community’s capacity to respond and recover from emergency events. To learn more about the Medical Reserve Corps and their commitment to improving the nation’s public health, visit their website.

Additional Preparedness Month resources can be found on the Centers for Disease Control and Prevention and Federal Emergency Management Agency websites.