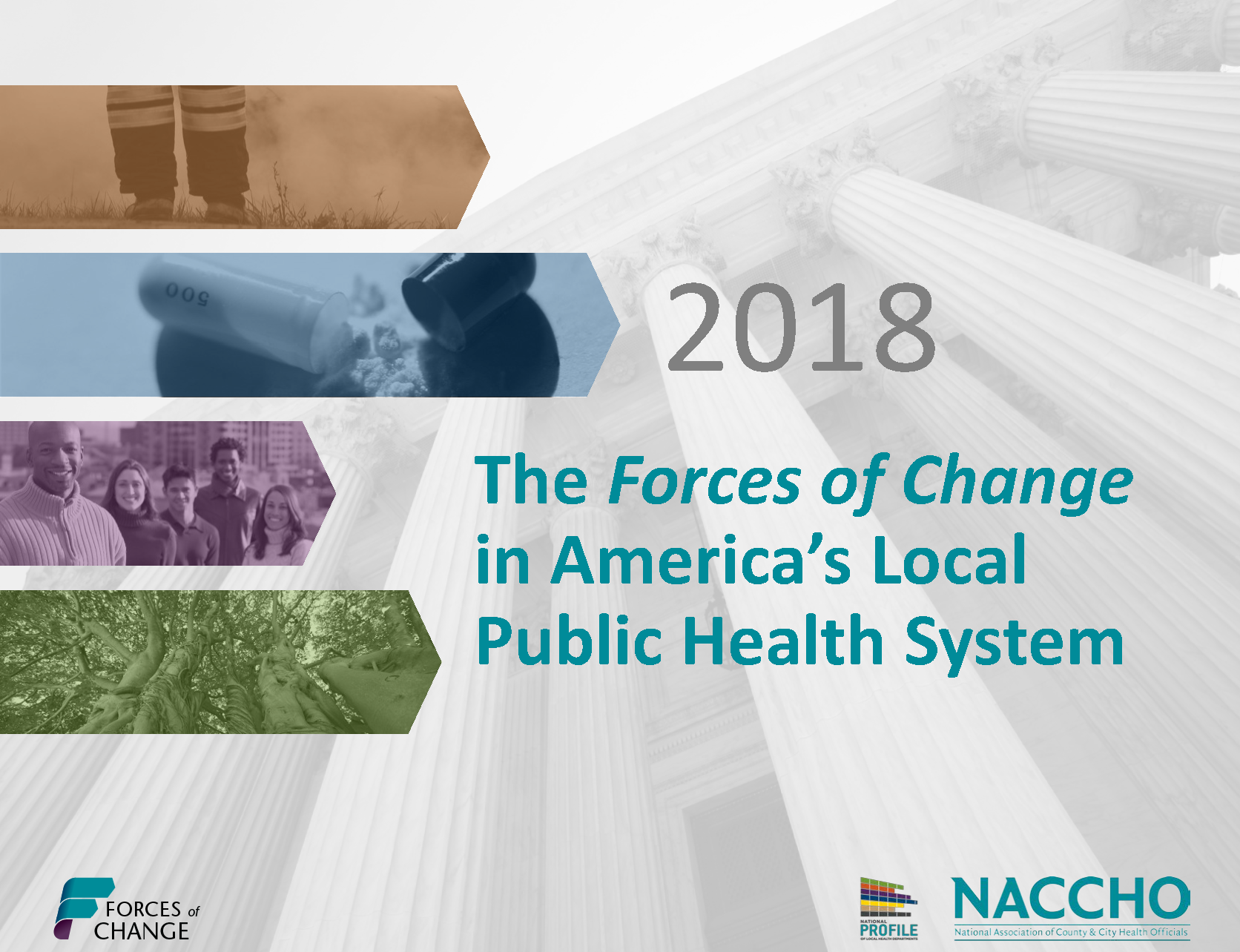 The National Association of County and City Health Officials (NACCHO) has released its 2018 Forces of Change report containing new findings on the forces that are affecting the nation’s local health departments (LHDs). LHDs face both challenges and opportunities as the public health environment evolves, and NACCHO has periodically surveyed LHDs to assess the impact of this changing environment on LHD budgets, programs, and workforce. Topics included in the 2018 Forces of Change focused on changes in LHD budget and workforce capacity, response to opioid use and abuse, population health activities, influenza preparedness and response, informatics capacity, and environmental health activities. Visit NACCHO’s Forces of Change webpage to read the full report.

Although the overall proportion of LHDs reporting budget cuts and job losses has remained steady in recent years, LHDs have eliminated 56,630 jobs over the past decade. In 2017, LHDs reported an estimated 800 jobs lost; of those, 500 were due to layoffs and another 300 were due to attrition. However, this is the lowest reported estimate since 2008. In addition, 2017 saw a positive net change in the number of job positions within LHDs—with 170 more jobs added than were eliminated. This evidence indicates that LHD staffing levels are starting to rebound from the Great Recession.

Overall, approximately two-thirds of LHDs reported conducting activities to address the opioid crisis in 2017. To do so, LHDs often partnered with local/state government agencies and healthcare organizations. Regardless of population size served, the major barrier to conducting opioid-related activities was a lack of dedicated funding. Combating the opioid epidemic and ensuring resilient communities requires a broad and integrated effort across the local public health system.

As the health of a community is impacted by people’s access to resources and supports, LHDs are increasing their work in population health—which includes addressing community infrastructure; community violence; family and social supports; food insecurity, hunger, and nutrition; and housing instability and homelessness. In 2017, nearly 75% of LHDs conducted activities to address food insecurity. Regardless of topic area, most LHDs reported partnering with local/state government agencies and non-profits to conduct population health activities. Although other entities provide these services in some communities, LHDs must be a partner and leader in population health work as they are uniquely positioned as the face of public health.

The 2017–2018 influenza season was particularly bad, with one of the dominant strains, H3N2, being associated with complications in people with certain conditions. To address this risk, the majority of LHDs participated in immunization-focused partnerships or coalitions in some capacity. In addition, the most common activities for LHDs during the most recent flu season were focused on disseminating information through outreach and education within the community and public communications platforms.

Informatics and health information technology (HIT) enable communication between providers to streamline healthcare systems, improve healthcare delivery, and ensure continuity in care across the lifespan. More than half of LHDs had access to data from an electronic syndromic surveillance system that uses hospital emergency department data. In addition, LHDs use these syndromic surveillance systems to detect influenza-like and food-borne illnesses. As LHDs continue to strengthen their informatics capacity, they will need to develop their staff in HIT capabilities.

Environmental health work at the local level protects the public’s health against a wide range of threats that can be worsened by the impacts of climate change. Although environmental health service provision experienced stabilization for many LHDs, the most commonly reported service reduction was in emergency preparedness. Furthermore, for almost all issues impacted by climate change, fewer LHDs reported addressing them in 2017 than in 2012—particularly in water-, food-, and vector-borne diseases; storms, hurricanes, and floods; and unsafe or ineffective sewage and septic system operation. Bolstering LHD capacity to address environmental health threats is an urgent need for the local public health system, especially as evidence for climate change increases.