Have you ever wondered where the creepy creatures with Halloween originated? Monsters have existed in lore for centuries and certain ones like vampires, werewolves, mummies, and zombies seem ubiquitous with spooky season. Legends like these have many eerie sources, including a rich history in early public health intervention efforts. Believe it or not, local health departments still keep these monsters at bay with the work they do every day.

If you notice a lack of real-life Halloween monsters throughout the year, please thank your local health departments and their staff!

So, what’s the grave story with vampires?

Vampires were first depicted in Eastern Europe in the late 17th and 18th centuries and were considered a serious threat creating a lot of bad blood. These early tales included the dead leaving their graves and killing both people and animals. Other behaviors and characteristics of vampires have included aggressive behaviors like biting, avoidance of sunlight, and humans behaving like or turning into animals. To the people at the time this added up to something supernatural. So, a public health intervention was devised to protect the community. Once a vampire was identified and buried, a large wooden stake was driven into the ground and through the monster’s heart to ensure it couldn’t climb out at night to feast on local residents. Over the years our intervention strategies have evolved a bit. Modern-day public health or medical professionals may interpret symptoms like this not to vampirism, but to potential rabies. Is it possible then that modern vampires and werewolves are actually descended from medieval rabies cases? In 1720s Hungary, for example, there was a rabies epidemic afflicting the population, which coincided with the time vampires took root in public discourse. Some more food for thought… what is the most common animal source for human rabies cases in the United States today? The answer of course is bats, a well-known animal in vampire lore.

Of corpse, one of the more alarming clues that lead people of this time to come to some unbelievable conclusions were exhumations of suspected vampires’ graves. The final nail in the coffin was when a person dies with rabies it is likely due to asphyxia or cardiorespiratory arrest, which causes the blood to remain liquid for a longer period than normal after death. Crypt-icly, during the exhumations, the natural decomposition and swelling process would have occurred, pushing the liquid blood out of the mouth. This would appear to the townspeople as fresh blood from a night of terrorizing the town. Since rabies was a new virus to the community, the hunt for monsters might have felt like one of the only ways to stop the vampires, or the pathogenesis of rabies.

The Wrap on the Curse of the Pharaoh

Have you ever heard about the curse of King Tut’s tomb? When archeologists opened his undisturbed grave site for the first time in 1922, an inscription that read “Death shall come on swift wings to him that toucheth the tomb of the pharaoh” was found. No one thought much of this until the financier of the dig, Lord Carnarvon, died suddenly from a “blood infection” under a year later. Others that took part in the opening of the tomb also started dying under curious circumstances, which brought international attention to the supposed curse of King Tut. So, what really happened? It just so happens that an epidemiological study was eventually conducted to determine whether people that went inside the tomb were at higher risk of death than the general public! It found that there was no association between the tomb and risk of death. The mystery remains to this day, was this media hype, or was there something more going on…. Gauze and effect: were ancient pathogens from Pharaohs’ tombs causing the untimely demise of Europeans who disturbed the final rest of ancient Egyptian royalty? It turns out that some ancient tombs do have ancient molds, bacteria, and chemicals that could potentially be dangerous to people and cause respiratory disease. Unraveling the mystery, laboratory analysis showed that mummies can carry Aspergillus niger and Aspergillus flavus, tomb walls can host Pseudomonas and Staphylococcus, and sealed inside sarcophagi you can also find ammonia gas, formaldehyde, and hydrogen sulfide. However, Europeans were most at risk of infection or danger from the unsanitary conditions outside of the tombs, compared to the exposure of pathogens when the tombs were opened. To wrap-up the mummy lore, while ancient infectious pathogens might be a little eerie, any of the untimely deaths of the Europeans who opened the tombs were unrelated to these ancient germs. While interesting to theorize it’s likely in this case that the mystique of the curse likely replaced the reality of it.

And right when you thought vampire lore was solved…

In New England, during the 1700s and 1800s, corpses were exhumed and gossip about suspected vampires began to infiltrate society and even made their way into newspapers. Tuberculosis, also referred to as “Consumption”, had been spreading throughout the United States. Tuberculosis (TB) has a unique pathogenesis and not everyone infected with TB develops disease symptoms, or the development of symptoms is delayed. These latent TB infections are part of why the spread of TB seemed supernatural to more rural communities that had fewer resources and information from medical experts who were just learning about TB. Since new disease symptoms would appear after the death of an afflicted family or community member, it seemed like the dead were rising from their graves to spread their condition and drain the life from the living. The scariest part of this outbreak was that there were no effective treatments or vaccines for TB and there wasn’t much a person could do once they were infected.

So, what are local health departments (LHDs) doing to prevent these ghoulish diseases? LHDs work to prevent and treat these diseases from spreading in your community. From screenings, providing vaccinations to prevent infections, and collaborating with healthcare systems for treatment efforts. Based on NACCHO’s 2019 National Profile of Local Health Departments, almost 90% of LHDs reported providing immunizations for various diseases including rabies. For the control of rabies, LHDs monitor and report cases of rabies from potential human exposures and animal surveillance/testing. Run-ins with rabid wildlife are where many cases come from in the US. Keeping an eye on where rabies is spreading in wildlife populations is key to responding to an outbreak and can inform where efforts and resources are needed.

Unfortunately, even with the treatments and vaccines that we have today, tuberculosis continues to be a global threat. There were almost 8,000 cases of TB reported in the US in 2021, and an estimated 13 million people with latent TB. While we are lucky to have treatment and prevention options for TB, drug resistant TB poses another threat to public health. Infection prevention and control can help combat the spread of TB and prevent more resistant strains from appearing. Local health departments provide resources to their communities to prevent and control the spread of TB. Screening and treatment for TB are some of the most common clinical services performed by LHDs. According to the 2019 Profile study, 86% of LHDs surveyed performed screening for TB, and 83% provided treatment for TB.

The idea of becoming a vampire or werewolf through the infectious spread of biting and exhibiting unusual aggressive behaviors might, today, indicate something a little more familiar... rabies. The curse of the pharaoh legend might lead modern health officials to imagine something more tangible like unearthing uncommon ancient infectious agents. And bitingly, it might not come as a surprise to know that the later tales of sullen and sickly-looking vampires coughing up blood and spreading their infliction upon family members was told during a surge of tuberculosis in the 1800s.

These histories of infectious diseases are quite a fright, but you can sleep a little more soundly at night knowing that your community is protected by modern-day monster hunters to provide prevention and treatment options. If you notice a lack of real-life Halloween monsters throughout the year, please thank your local health departments and their staff!

CDC (Reviewed 2019, June 11). How can you prevent rabies in people? Retrieved October 18, 2022, from https://www.cdc.gov/rabies/prevention/people.html

Handwerk, B. Curse of the Mummy. National Geographic. Retrieved October 18, 2022, from https://www.nationalgeographic.com/history/article/curse-of-the-mummy

Jaclyn Abramson is a Program Analyst on the NACCHO Infectious Disease team. Learn more about how NACCHO works with local health departments to strengthen their capacity to prevent and control infectious diseases here. 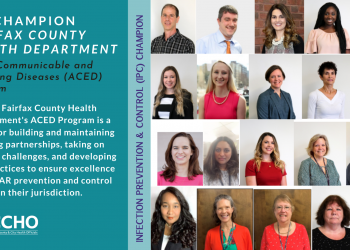 The Centers for Disease Control and Prevention published an article in PLOS One...

In collaboration with the NYC Department of Health and Mental Hygiene, NYC...